Thirteen graduates of Grayling High School and four current seniors have earned the designation of AP® Scholar by the College Board in recognition of their exceptional achievement on the college-level Advanced Placement Exams. Only 20 percent of the more than 2,200,000 high school students worldwide who took these exams performed at a sufficiently high level to merit the recognition of AP Scholar.

Eight GHS students qualified as AP Scholars, a designation given to those students who receive grades of 3 or higher on three or more AP Exams:

Three students qualified for the AP Scholar with Honor Award, which is granted to students who receive an average grade of at least 3.25 on all AP exams taken and grades of 3 or higher on four or more AP Exams:

Six students qualified for the AP Scholar with Distinction designation, which is granted to students who receive an average score of at least 3.5 on all AP exams taken and scores of 3 or higher on five or more of these exams:

Grayling High School has offered AP classes since 1980. The first course offered was English Composition. Since that time, the program has expanded, and students are now able to take AP courses in biology, calculus (AB and BC), statistics, computer science chemistry, English language and literature, psychology, Spanish, U.S. history, and European history. Students at GHS have also taken AP exams in French, German, human geography, physics, U.S. government and world history through independent study. The number of GHS students taking AP exams has steadily increased over the years, with 75 students taking a total of 129 exams this year. As well, test scores continue to be above the state and national averages.

To find out more about the Advanced Placement Program, you can visit the website at www.collegeboard.org. 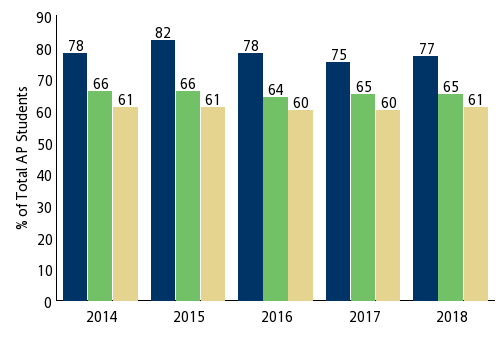 Percent of students scoring 3+ on Exams